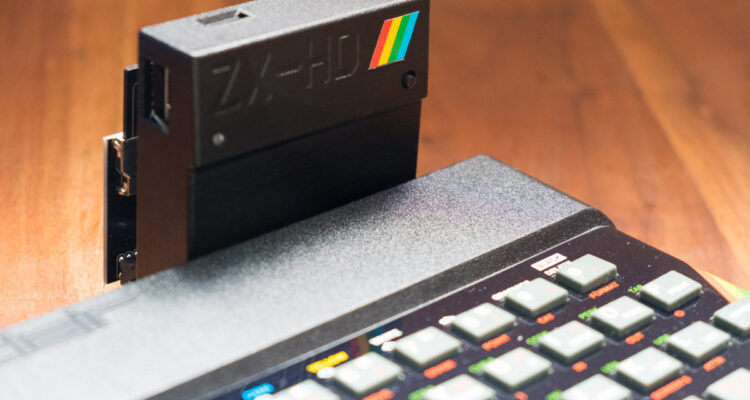 Looks like this year came with new options for connecting out old ZX Spectrum to modern TV or monitor with HDMI input. I’m really glad that very soon after TKpie I’m able to test another but more feature built unit done by Bytedelight – named ZX HD.

So we have two levels of using ZX HD – one is just – video output thru HDMI to modern TV or monitor (so similiar to TKpie), next level is play&fun with ULAplus features.

The whole unit came as DIY kit, I have already soldered RPiZero so it was just a pleasure to put together, kind of LEGO for older geeks.

The enclosure is 3d printed, the only ‘but’ is about back plate – it’s so thin so one side edge is a little bit curved. Otherwise – looks great with all machines I tried with and give great video output.

Minor – as like with TKpie – lack of audio in HDMI connection. If you use separate amplifier for your sound – donot care about this. If you want to put all-in-one cable – you have a little bit trouble.

Of course – there is trick – use HDMI to DVI converter (cheap as 1 USD on ebay), then use converter box (around 25-30 USD) that link together stereo audio L/R and DVI to HDMI output. Sounds complicated, but I did this a few years ago combining DVI signal from my mac and stereo output from firewire800 external sound card. It worked in the past, now is just cheaper.

Also if you use like me Avermedia Gamecapture HDII – there is option in this unit to switch audio from HDMI to analog L/R input – similiar solution can be found in setup of flat LCD/LED TV. Since that moment I’m more then happy 🙂

It starts with ZX HD screen, confirm resolution of the output video, you confirm that by button on the ZX HD and that’s it.

That could be your story – connecting your old speccy to modern flat TV with HDMI input. But let’s complicate it a little bit. Imagine – you can take any HDMI monitor or TV, even small 4″ field monitor and use your speccy on holidays… or at least try to use 🙂

I have taken my SmallHD 4″ video field monitor that I use doing videography and I have connected it to ZX HD hooked ZX Spectrum. No signal. Then I used HDMI splitter and connected two outputs – one to flat TV (Samsung if you asked) and 2nd to SmallHD field monitor. Both had video signal this time. Then I did another test – for gameplay recording I use Avermedia Game Capture HDII – same problem when I connect ZX HD directly only to this unit. Note – I was able to do this with TKpie. I was talking to Ben – probably it’s because ZX HD software “talks” with end hardware to confirm it’s resolution etc. – and here we got the problem if we end unit has loopthru HDMI output… It was just the theory until I tested ZX HD with 9″ portable monitor without loopthru HDMI output feature. Then tried other monitors without loopthru feature… all they worked with ZX HD.

So generally – for recording from ZX HD – you still need regular TV or monitor without feature of loopthru output over HDMI. If you use HDMI splitter (bargain cost like 20-30 USD) you can separate two signals – one to TV, 2nd to recorder or use recorder output for connecting to TV (both ways work).

For all people having access to TV unit with possibility to switch audio source from HDMI to analog – same for any grabber with that function:

This is something new, above other hardware on the market. With ZX HD you have possibility to enjoy more colours on the screen coming initially from your ZX Spectrum. What is the history of ULAplus? The idea comes from developers of ZX Spectrum SE, Andrew Owen and Jarek Adamski, unfortunately apart to the prototype it hasnot been produced. Generally ULAplus extends the total palette to 260 colours. According to ULAplus website:

Unfortunately haven’t found too much stuff with that feature. There are Cronosoft games extended to ULAplus feature (as Jonathan Cauldron’s AGD system allow to use ULAplus palette), some nice demos, Palette Editor and some example palettes dedicated for games and… that’s it. Maybe situation will change a little with ZX HD unit – as it gives possibility to enjoy ULAplus additional colours on any speccy with ZX HD.

Some examples of ULAplus features below. I will cover more on these features including Palette Editor soon.